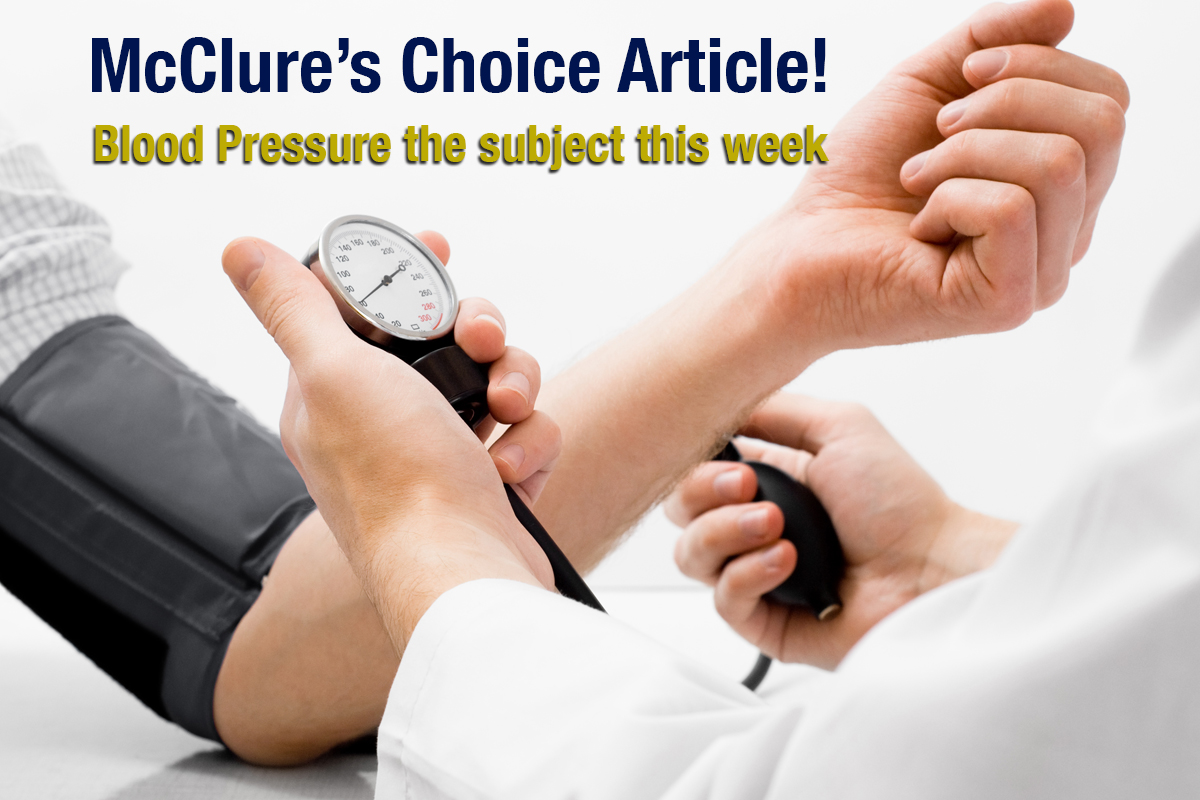 Check out this article about blood pressure…..

BP accuracy is the ghost in the machine

SAN FRANCISCO – Amid all the talk about subgroup blood pressure targets and tiny differences in drug regimens at a recent hypertension meeting, there was an elephant in the room that attendees refused to ignore.
MD-IQ QUIZ: Diagnosis of syncope
Treatment & Diagnosis of Cardiology
Drug & Dosing Information

Hypertension control – the number one way to prevent cardiovascular death – depends on a simple measurement taught to all medical practitioners, but one that’s rarely done right: blood pressure measurement. “We do it wrong,” said Dr. Steven Yarows, a primary care physician in Chelsea, Mich., who estimated he’s taken 44,000 blood pressures in his 36 years of practice.

Inaccurate measurement is such a problem in the United States that someone in his audience half-joked that the American Heart Association should release two hypertension guidelines the next time around, one for when blood pressure is measured correctly, “and one for the rest of us.”

Everyone in medicine is taught that people should rest a bit and not talk while their blood pressure is taken; that the last measurement matters more than the first; and that most Americans need a large-sized cuff. Current guidelines are based on patients sitting for 5-10 minutes alone in a quiet room while an automatic machine averages their last 3-5 blood pressures.

But when Dr. Yarows asked his 300 or so audience members – hypertension physicians who paid to come to the meeting – how many actually followed those rules, four hands went up. It’s not good enough; “if you are going to make a diagnosis that lasts a lifetime, you have to be accurate,” he said at the joint scientific sessions of the American Heart Association Council on Hypertension, AHA Council on Kidney Cardiovascular Disease, and American Society of Hypertension.

There’s resistance. No one has a room set aside for blood pressure; staff don’t want to deal with it; and at a time when primary care doctors are nickel and dimed for everything they do, insurers haven’t stepped up to pay to make accurate blood pressure a priority.

To do it right, you have to ask patients to come in 10 minutes early and have a room set up for them where they can sit alone with a large oscillometric cuff to average a few blood pressures at rest, Dr. Yarows said. They also need at least one 24-hour monitoring.

“Most of the time, the patient walks over from the waiting room, they get on the scale which automatically elevates the blood pressure tremendously, and then they sit down and talk about their family while their blood pressure is being taken.” Even in normotensive patients, that alone could raise systolic pressure 20 mm Hg or more, he said. It makes one-time blood pressure pretty much meaningless.

The biggest problem is that blood pressure is hugely variable, so it’s hard to know what matters. In one of Dr. Yarows’ normotensive patients, BP varied 44 mm Hg systolic and 37 mm Hg diastolic over 24 hours. In a hypertensive patient, systolic pressure varied 62 mm Hg and diastolic 48 mm Hg over 24 hours. Another patient was 114/85 mm Hg at noon, and 159/73 mm Hg an hour later. “That’s a huge spread,” he said.

Twenty-four hour monitoring is the only way to really know if patients are hypertensive and need treatment. “Any person you suspect of having hypertension, before you place them on medicine, you should have 24 hour blood pressure monitoring. This is the most effective way to determine if they do have high blood pressure,” and how much it needs to be lowered, he said.

Dr. Yarows had no disclosures.