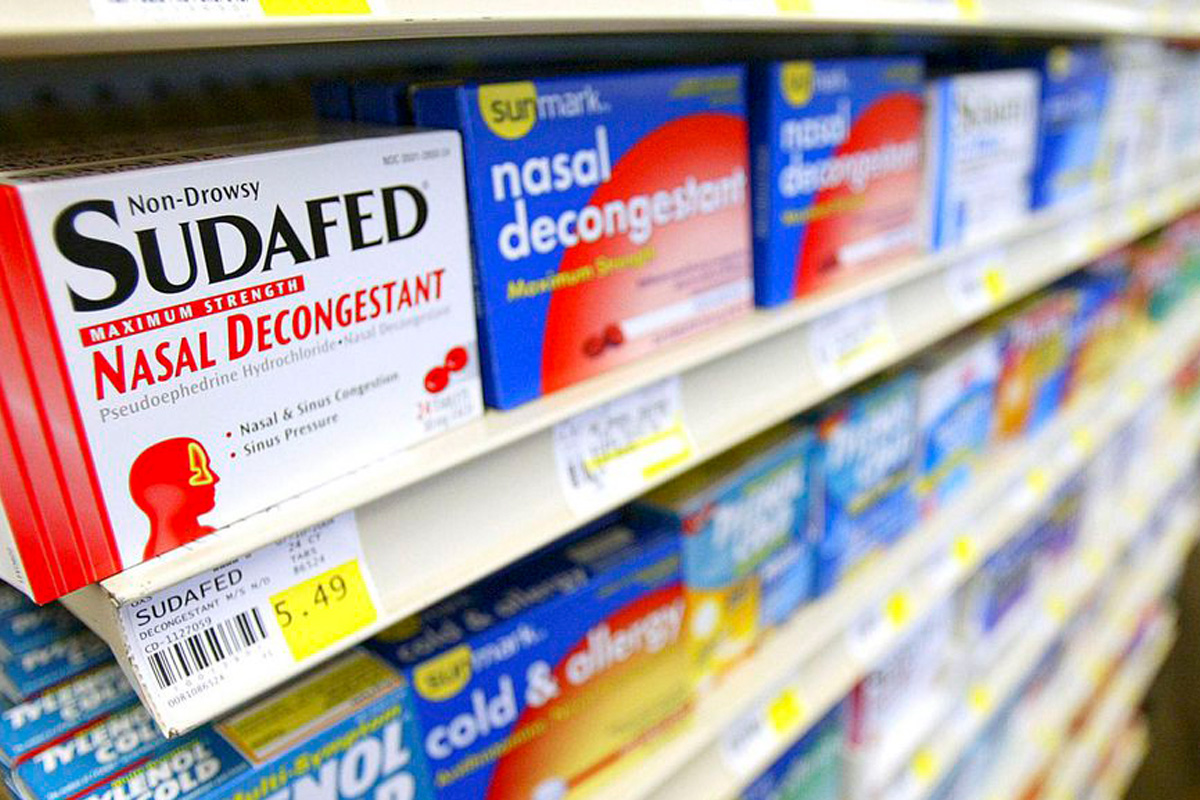 Check out this article about oral decongestants…..

The text of the article is here:

It is unclear. Pseudoephedrine causes an average increase of 1.2 mm Hg in systolic blood pressure (BP) in patients with controlled hypertension. However, the studies are not adequately powered to provide evidence about whether this rise in systolic BP is linked to patient-oriented outcomes (strength of recommendation [SOR]: C, multiple randomized controlled trials [RCTs] supporting disease-oriented evidence). Significant variations in BP are defined differently among studies (TABLE1-7). In addition, we do not have data on chronic use of oral decongestants; the longest time on medication in these trials was 4 weeks.

A meta-analysis of 24 RCTs examined the effect of pseudoephedrine on BP and heart rate.1 Just 5 of the 24 studies specifically included hypertensive patients. In the population of patients with hypertension, the meta-analysis showed a small (1.2 mm Hg) rise in systolic BP with pseudoephedrine that was statistically significant (95% confidence interval [CI], 0.56-1.84 mm Hg), but the slight changes in diastolic BP and heart rate were not significant. No patient-oriented outcomes were measured.

The highest quality study within this group was a randomized, double-blind, placebo-controlled crossover study with 28 patients given sustained-release pseudoephedrine 120 mg twice daily for 72 hours, with BP measurements taken at 48 and 72 hours.2 The study was powered to identify an increase in systolic BP of 11 mm Hg, but the results showed just a 3.1 mm Hg rise in systolic BP at 48 hours (see TABLE1-7 for CI and other data).

In another double-blind, placebo-controlled RCT of 29 adults with hypertension (only 25 were included in the data analysis), there was no significant elevation in BP when oral pseudoephedrine was administered over the course of 3 days.3

Across the 5 studies in the meta-analysis, immediate-release and sustained-release forms of pseudoephedrine were included, hypertension was described as controlled but definitions of control were not always specified, and study length varied from 2 hours to 4 weeks.2-6 Patients on antihypertensive medications were included in some of the studies; patients who had active cardiovascular disease, peripheral vascular disease, and/or cerebrovascular disease were excluded.

One study specifically looked at the effects of a single dose of pseudoephedrine on BP in patients treated with 2 different beta-blockers and found no significant change from baseline, but this study was not powered to show differences less than 5 mm Hg.6 The study did show a change of 1 to 2 mm Hg in systolic BP, but this was not statistically significant.

An absence of information on older patients

There is a paucity of literature on treating older adults and medically complex patients (eg, those with uncontrolled or secondary causes of hypertension, cerebrovascular disease, coronary artery disease) with decongestants, as they were excluded in all studies. And the available evidence does not include reports of adverse events other than changes in BP.