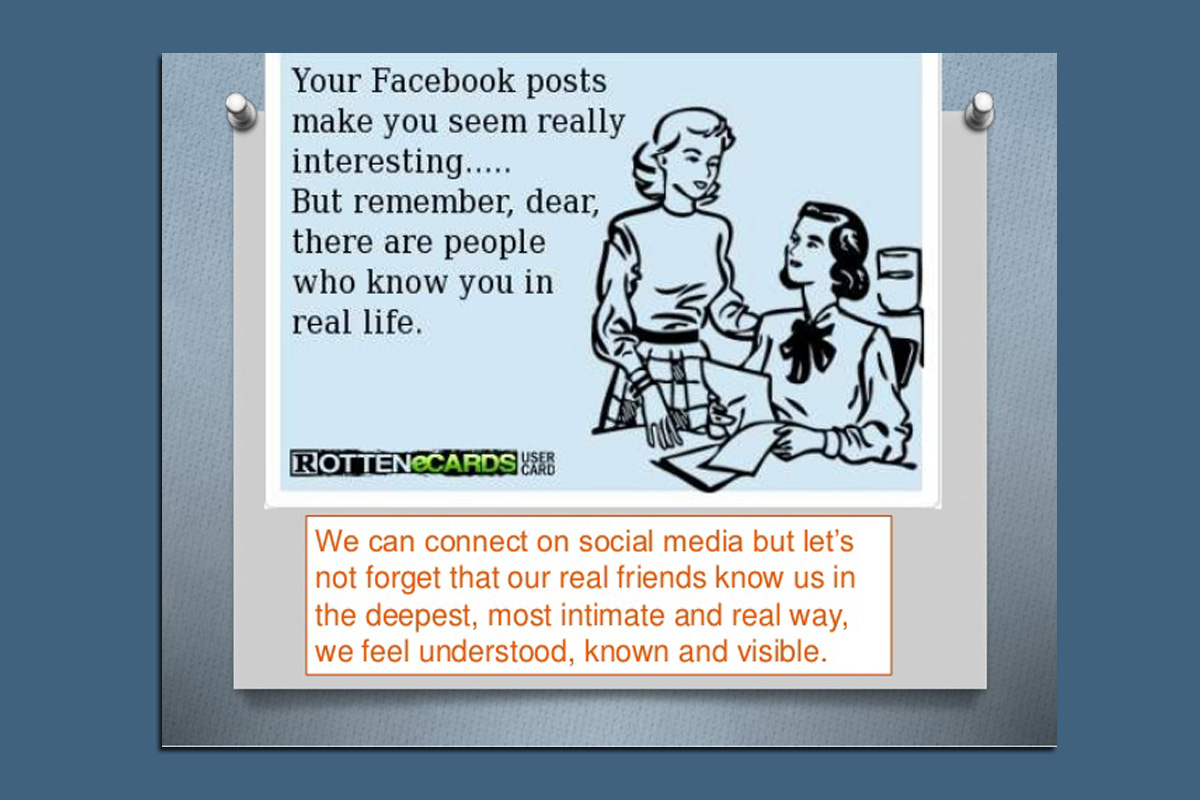 Check out this article about social media use…..

Don’t just blame Facebook for fake news: It’s us, too

These actors must be reined in online, for the very simple reason that so many of us are immersed in our news feeds and Twitter streams, and thus susceptible to whatever toxins are allowed to proliferate there.

Social media is responding, though, however belatedly. Facebook shut down fake accounts en masse in the run-up to the recent German elections, and is hiring 1,000 employees to review ads. Congress is responding, too, with investigations. But the medium is the message, and the biggest toxin may be our great reliance on social media in the first place. Blaming Facebook is a bit like placing sole blame on the cartels for the drug epidemic. We should pay at least some attention to the addicts: us.

Some have called apps, including social media, “the race to the bottom of the brainstem.” The most primitive parts of our brain, responsible for fight-flight and survival, are always on the lookout for perceived threats. In our restless, clicking and scrolling state, we are often naturally attracted to and activated by tantalizing, titillating, and emotionally charged posts that are lacking in reason, but are inflammatory and viscerally captivating. Viral news, click bait, gossip, rumors, and scandals get a disproportionate share of our attention. And since we become what we do, our reason is overwhelmed by reaction. In fact, a recent 60 Minutes segmentdemonstrated how President Trump’s political operatives optimized Facebook ads for reaction, not thought. As we engage in social media, we may become less reasonable, and prone to reacting out of our most base and primal fears.

The late neurologist and psychiatrist Viktor E. Frankl pointed out our freedom lies in our ability to put space between stimulus and response. In this space lies our freedom to choose, he wrote. Online, this inner life can shrink. Our wandering minds look for cheap thrills and anything that confirms our biases of threat. We reduce the world to simplistic one-size-fits-all narratives, and heap blame on our usual suspects. I call the Internet the angernet. Anger is the most viral and contagious emotion on social networks, and as we use social media, we deepen the groove of anger – making our anger more likely and the most readily shared.

But we’ve been racing to the bottom of the brainstem, where fear, anger, hatred, and reactivity reside, for decades in this country. Again, we can’t simply blame social media.

Trust has been eroding for decades, for many reasons. No matter the generation, only a minority of us trust each other, according to the Pew Research Center’s surveys.
Millennials are the least trusting of all: Only 19% of them agree that “generally speaking, people are to be trusted.” Any scroll of the news feed quickly confirms this dangerous bias to mistrust, as we are besieged by a near cataclysmic barrage of traumatic events. We are also more polarized than ever, with a great percentage of partisans believing that the other side aims at the destruction of all they hold dear in America. As we feel more vulnerable, we are more likely to mistrust and become further polarized, and the cycle continues.More importantly, as we flee real-world relationships and interaction for the ease and seeming reach of the online world, we lose subtle cues and important connections that would normally soothe our reactivity. Humanity has evolved and progressed precisely because of our social connections. We are who happens to us, and what we make of the happening. When we connect in more superficial ways, we endanger our very identities. As a nation, we are having an identity crisis: We have not worked out who we are in relation to one another, and to ourselves. This is expressed politically, and in our confused and fearful opinions and appraisals of each other and government. Without the good graces that come out of shared presence in real-world relationships, we are more likely to think badly of each other. We are more likely to retreat into narrow and tribal identities where we think safety resides, and deemphasize communal identity. In this space of narrow identity, ideological self-righteousness and dogma prevail, and we are less likely to listen and cultivate curiosity, understanding, and empathy for others. One example lies in how representatives and senators spend less time socializing with each other than in years past, and are thus less likely to forge compromise. Online, we are all refugees from the real world, and we fall to building our own personal walls and exiling those with whom we disagree – who then become those we hate, fear, blame, and fight.We have met the enemy, and it is us.

The antidote to mistrust is in cultivating the top of our nervous systems, where long-term planning and positive emotions reside. We can only do this through real-world relationships. Social media will not ultimately take us to a feeling of society. It might provide a glimmer of connection, but its inherent vectors of disconnection and division are proving deadly, from Internet radicalization, to the increased levels of depression, anxiety, loneliness, and suicidality noted with increasing Internet and social media use.

We each have incredible human possibilities, but to reach them, we have to transcend the biases and reactivity of our habitually and usually unconsciously self-centered egos. We can start with awareness of what the Internet siren is doing to us and steer our ships in a more fruitful direction. Toward home, toward our hearts, and toward each other.
Dr. Chandra is a psychiatrist and writer in San Francisco. He is the author of Facebuddha: Transcendence in the Age of Social Networks (Pacific Heart Books, 2017).