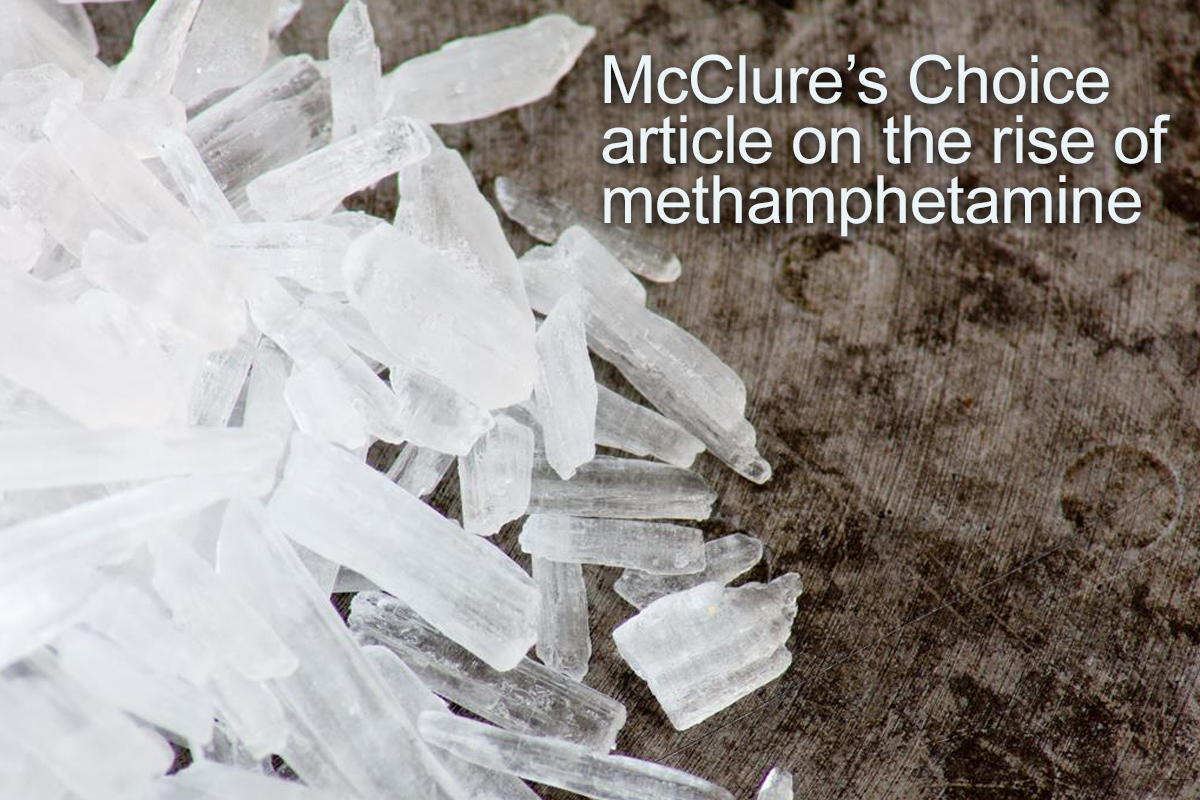 Check out this article about methamphetamine….

Overshadowed by opioids, meth is back and hospitalizations surge

Publish date: November 27, 2018
By Anna Gorman, Kaiser Health News
The number of people hospitalized because of amphetamine use is skyrocketing in the United States, but the resurgence of the drug largely has been overshadowed by the nation’s intense focus on opioids.

Amphetamine-related hospitalizations jumped by about 245% during 2008-2015, according to a recent study in the Journal of the American Medical Association. That dwarfs the rise in hospitalizations from other drugs, such as opioids, which were up by about 46%. The most significant increases were in Western states.

The surge in hospitalizations and deaths from amphetamines “is just totally off the radar,” said Jane Maxwell, PhD, an researcher at the Addiction Research Institute at the University of Texas at Austin. “Nobody is paying attention.”

Doctors see evidence of the drug’s comeback in emergency departments, where patients arrive agitated, paranoid, and aggressive. Paramedics and police officers see it on the streets, where suspects’ heart rates are so high that they need to be taken to the hospital for medical clearance before being booked into jail. And medical examiners see it in the morgue, where in a few states, such as Texas and Colorado, overdoses from meth have surpassed those from the opioid heroin.

Amphetamines are stimulant drugs, which are legally prescribed to treat ADHD and produced illegally as methamphetamine. Most of the hospitalizations in the study are believed to be from methamphetamine use.

Commonly known as crystal meth, methamphetamine was popular in the 1990s before laws made it more difficult to access the pseudoephedrine, a common cold medicine, needed to produce it. In recent years, law enforcement officials said, there are fewer domestic meth labs and more meth is smuggled in from south of the border.

As opioids become harder to get, police said, more people have turned to meth, which is inexpensive and readily available.

Lupita Ruiz, 25, started using methamphetamine in her late teens but said she has been clean for about 2 years. When she was using, she said, her heart beat fast, she would stay up all night, and she would forget to eat.

Ms. Ruiz, who lives in Spokane, Wash., said she was taken to the hospital twice after having mental breakdowns related to methamphetamine use, including a month-long stay in the psychiatric ward in 2016. One time, Ms. Ruiz said, she yelled at and kicked police officers after they responded to a call to her apartment. Another time, she started walking on the freeway but doesn’t remember why.

“It taxes your first responders, your emergency rooms, your coroners,” said Robert Pennal, a retired supervisor with the California Department of Justice. “It’s an incredible burden on the health system.”

Costs also are rising. The JAMA study, based on hospital discharge data, found that the cost of amphetamine-related hospitalizations had jumped from $436 million in 2003 to nearly $2.2 billion by 2015. Medicaid was the primary payer.

“There is not a day that goes by that I don’t see someone acutely intoxicated on methamphetamine,” said Tarak Trivedi, MD,, an emergency room physician in Los Angeles and Santa Clara counties. “It’s a huge problem, and it is 100% spilling over into the emergency room.”

Dr. Trivedi said many psychiatric patients also are meth users. Some act so dangerously that they require sedation or restraints. He often sees people who have been using the drug for a long time and are dealing with the downstream consequences.

In the short term, the drug can cause a rapid heart rate and dangerously high blood pressure. In the long term, it can cause anxiety, dental problems and weight loss.

“You see people as young as their 30s with congestive heart failure as if they were in their 70s,” he said.

Jon E. Lopey, the sheriff-coroner of Siskiyou County in rural Northern California, said his officers frequently encounter meth users who are prone to violence and in the midst of what appear to be psychotic episodes. Many are emaciated and have missing teeth, dilated pupils, and a tendency to pick at their skin because of a sensation of something beneath it.

“Meth is very, very destructive,” said Sheriff Lopey, who also sits on the executive board of the California Peace Officers Association. “It is just so debilitating the way it ruins lives and health.”

Because there has been so much attention on opioids, “we have not been properly keeping tabs on other substance use trends as robustly as we should,” said study author Tyler Winkelman, MD, a physician at Hennepin Healthcare in Minneapolis.

Sometimes doctors have trouble distinguishing symptoms of methamphetamine intoxication and underlying mental health conditions, said Erik Anderson, MD, an ED physician at Highland Hospital in Oakland, Calif. Patients also may be homeless and using other drugs alongside the methamphetamine.

Unlike opioid addiction, meth addiction cannot be treated with medication. Rather, people addicted to the drug rely on counseling through outpatient and residential treatment centers.

The opioid epidemic, which resulted in about 49,000overdose deaths last year, recently prompted bipartisan federal legislation to improve access to recovery, expand coverage to treatment, and combat drugs coming across the border.

There hasn’t been a similar recent legislative focus on methamphetamine or other drugs. And there simply aren’t enough resources devoted to amphetamine addiction to reduce the hospitalizations and deaths, said Dr. Maxwell. The number of residential treatment facilities, for example, has continued to decline, she said.

“We have really undercut treatment for methamphetamine,” Dr. Maxwell said. “Meth has been completely overshadowed by opioids.”

Kaiser Health News is a nonprofit national health policy news service. It is an editorially independent program of the Henry J. Kaiser Family Foundation that is not affiliated with Kaiser Permanente. KHN’s coverage in California is supported in part by Blue Shield of California Foundation.