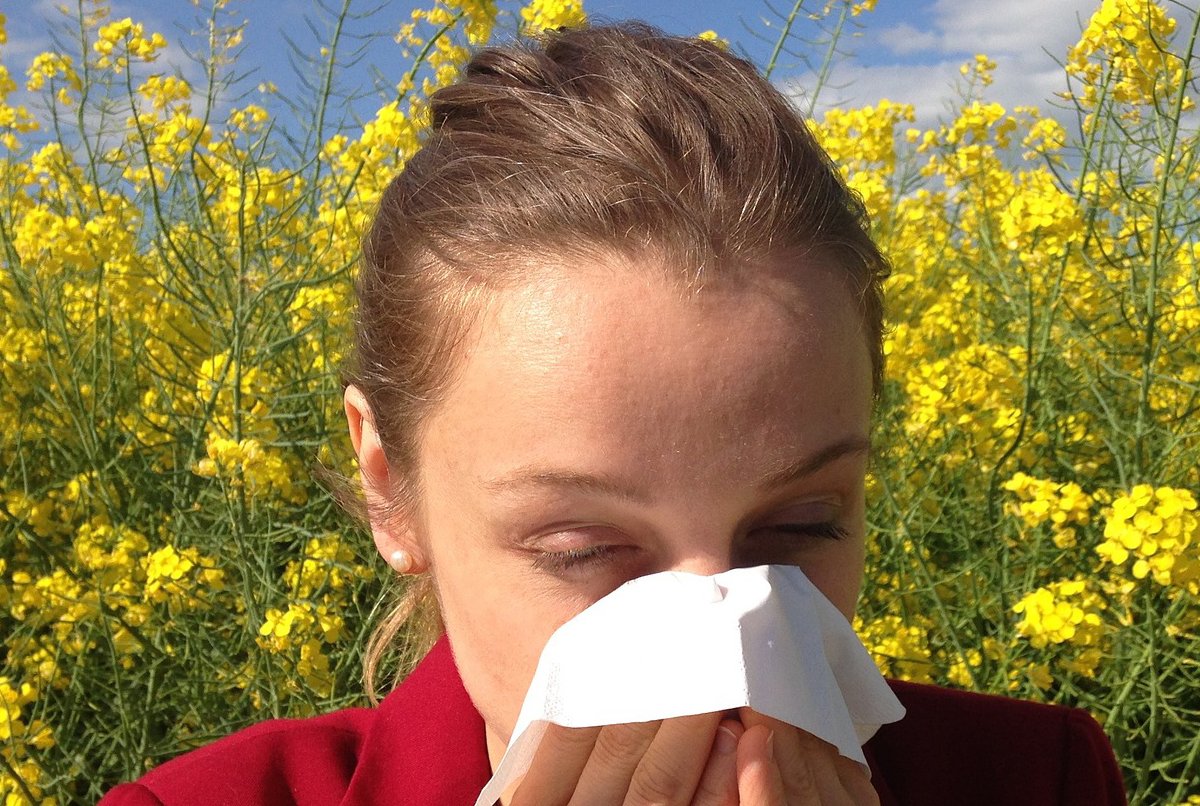 Check out this article about pollen and allergies…..

For many years now pollen researchers have been measuring the distance pollen grains can travel in the air. Pollen grains of certain limited species that are (relatively) very small, dry, rounded in shape, and exceptionally low in specific gravity are able to travel long distances, occasionally hundreds of miles. Nonetheless, most species have pollen grains that are larger, heavier, odd-shaped, and often sticky, and some may be able to travel less than a dozen feet unless picked up by a very stiff wind.

In 1972 meteorologist Gilbert Raynor measured pollen dispersal from a square mile stand of pure Timothy grass (1). Timothy pollen is well known to be exceptionally light, dry, rounded and very buoyant. Raynor found that while he was able to still trap some pollen a mile out from the field, the closer he was to the field, the greater the amount of pollen in his traps. While Raynor was able to trap very small amounts of this Timothy grass pollen a mile from the field, he found that by a half a mile away, more than 99.9% of the field’s pollen grains had already fallen out, landed, and were no longer in circulation. By far the greatest amounts of pollen grains were trapped on the traps closest to the field itself. (8)

Locality must always be considered with all persistent cases of pollinosis (pollen allergy or “hay fever”). Allergy is not triggered by minor exposure to a few pollen grains, but rather is initiated in atopic individuals by exposure to a large amount of pollen. This principle is the same for all types of allergens and related allergic responses; allergy is almost always caused by repeated over-exposure(s) to an allergen over an extended period of time. With this in mind, allergens that come from sources that are very close to where individuals live or work, these are the allergens that are most likely to trigger symptoms. Below, some examples of proximity pollinosis, pollen dispersal and locality from the planted landscape in a few different urban areas across the world:

Las Vegas, Clark County Nevada: March, 17, 2009: Clark County Department of Air Quality and Environmental Management stated that: “The department considers mulberry (pollen) levels higher than 1,500 grains per cubic meter to be “very high.” On this same day they also made this note: “The highest level, 10,887 grains (per cubic meter of air space), was reported Tuesday at Griffith Elementary School, near Meadows Mall.” (2)

In the same article local allergists were interviewed. “Dr. Mulberry is a very good referring physician,” Dr. Joram Seggev, a Las Vegas board certified allergist and immunologist, said about the number of patients streaming in and out of his office with runny noses and irritated eyes. Dr. Seggev, along with Dr. Jim Christensen, a Las Vegas internal medicine and allergy specialist, said, “the allergy season actually began in mid-February with Arizona Ash tree (pollen) pollutants.” (2)

It is important to note in the above discussion of Las Vegas, that all of the trees causing the allergy referred to here, the male mulberries and the male clonal Arizona Ash selections, 100% of them are planted trees, growing in the area’s planted landscapes. It is useful too, to note, that the highest pollen counts were found in area elementary schools, as on inspection, schools are almost always found to have been landscaped with an abundance of both trees and shrubs that are clonal male selections. Such selections, produced and sold en mass by large modern horticultural companies, are “litter-free”, they do not produce any fruit or berries, but being male, they do produce very large amounts of allergenic pollen.

Asthma: The pollen from these planted urban trees does not simply trigger episodes of allergy. “Pollen allergies also worsen asthma conditions,” Dr. Seggev said. “Some of my patients only have asthma during the allergy season. I had three such patients today (Tuesday) and their stories are typical. One is asthmatic March through August, and the others February till May. It all depends on what’s blossoming.” (2)

One last note on mulberry pollen and Las Vegas: “Clark County began monitoring pollen in 1988, and the record mulberry pollen count is 69,224 grains per cubic meter, set in March 2005 at the Griffith station.” (3) Please note here, again, that the “Griffith station” is once more in the news, and the pollen trap at this “station” is located on roof of the Griffith Elementary School. It should come as little surprise that the school has numerous fruitless mulberry trees planted in its school yards.

Years ago Clark County banned planting of fruitless (male) mulberry trees, but those that were already planted were grandfathered in and have grown large canopies over several decades…and it is these very same trees that are still causing allergies in their own proximity. With this in mind, in the future as more school yards are converted to be allergy free zones, the existing trees that are known to be the most allergenic, these should probably be removed and then replaced with more suitable trees. In the case of Las Vegas, these grandfathered in trees will be affecting citizens for many years to come. “Some communities however have already come to the realization that certain pollen producing plants are causing a problem.  Tempe, Arizona and Las Vegas, Nevada have outlawed the planting of olive and mulberry trees because of they’re extremely allergenic.  Las Vegas (unfortunately) already has 200,000 male mulberry trees.” (4)